You are here: Home / Original Reporting / Why Nashville’s Craft South is a game changer

Sporting a spunky ponytail, a cozy knit sweater, and a cup of coffee – Craft South owner Anna Maria Horner cheerfully greets us as she enters the shop.

She is warm and energetic – immediately ready to sit down and chat about her life and business.

To get to the origins of her newest business venture, Horner says it’s been a 20-year journey marked with stops along the way in just about every creative endeavor possible – garment making and designing, writing books and patterns, designing fabric and housewares, painting, teaching…

“My background is one of someone who was taught to sew at home by my mom,” recalled Horner. “I knew from a very young age that making things for yourself was possible. You could do that, and you didn’t have to buy your clothes from a store.” Growing up in an artistic family, she made many of her own things throughout high school and college.

“No one is going to beat down your door to offer you a job when you have a degree in drawing, so you have to create something for yourself,” Horner said. “Because I had been doing the clothing and it was going well, I decided to open a shop together with my mom called Handmaiden, and we did that for three years.”

With her husband finishing his education and having the responsibilities that come with a young family, Horner eventually moved into more of a designing role in lieu of the physical demands of making each and every piece. She partnered with companies to produce not only clothing – but gift items, stationary, and eventually fabric.

“It was really fabric design that brought me into the craft industry,” she acknowledged. “That also opened up opportunities to write sewing and embroidery patterns, and then books.”

Horner found herself not only designing, but running an online shop for her own brand; continuing to write books and patterns, as well as traveling frequently to teach workshops and classes on sewing and needle art.

She observed that teachers were traveling from other cities, and started exploring the possibility of setting up shop in the Nashville area.”

“The traveling, the teaching, and wanting to get the online business out of my house was what compelled me to look for a space,” Horner explained.

Before landing on a permanent location, Horner was able to successfully test out her concept by organizing a series of pop-up workshops – including patchwork with Amy Butler, needleworks with Heather Ross, fashion by hand with Natalie Chanin, and garments with Liesl Gibson.

Then Horner found a spot that seemed to be destined for her – a brand new building in an area aptly named ’12South.’ “We are beginning this adventure with a million little glimmers.  Some of them hard work, some of them prayers, some of them art, some of them stitches and some of them are you.  Thank you so much for any bit of help, encouragement, purchases, notes or thoughts you have lent to my process as a designer over the years.  They have all brought me to a place – a physical one that I will gladly walk into and I hope to see you there.”

This ultra-hip Nashville neighborhood was named on a list of the “South’s Best Neighborhoods” by Southern Living: Nashville’s favorite fashion and lifestyle destination fosters the kind of community vibe you won’t find in a mall. Maybe it’s all those historic foursquares and ice-cream socials.

Craft South is surrounded by complementary businesses including Frothy Monkey (where Horner is a frequent customer to get her java fix), one-of-a-kind clothing boutiques, and  restaurants – all with their own unique spin.

According to The Tennessean, “Nashville” star Connie Britton enjoys strolling through the neighborhood with her son.

“What I really enjoy is having people walk in and say ‘I’m so glad you’re here!’ That’s part of why we chose this location, is because it’s a true neighborhood,” shared Horner. “We opened at the beginning of the summer, a time that tends to be slow for retail – people are vacationing, their children are home from school, parents don’t have as much time to get out. In spite of all that, we’ve had a lot of foot traffic through the doors.” The first time I’d heard about any of this was from a woman I was sitting next to in a class at a sewing convention. She was telling me about an opportunity she had to go to Horner’s home and tour her studio – with the excitement level one would have describing a meet-and-greet with an A-list movie star or musician.

After some light research, I figured out that the event my classmate was referring to was SewDown: Nashville, an “all-inclusive weekend quilting getaway” put on by The Modern Quilt Guild.

I asked Horner what her thoughts were on being considered a “sewlebrity” – someone well-known within the sewing/quilting realm who typically has a fan base.

While she admitted she wasn’t sure why people attached themselves to designers, Horner theorized that they enjoy learning about a sewlebrity’s back story and feeling like they’re somehow connected.

“I feel flattered any time anyone thinks what I’m doing is special and appreciates it enough to care about me,” she expressed.

Weekend sewing retreats, workshops with one or more sewlebrity teacher, conventions such as QuiltCon, and camps for both children and adults are all the rage. Sewing and quilting events are becoming a vacation destination for many in the “hardcore” category.

Since Craft South’s storefront has been open, Horner has already hosted close friend Denyse Schmidt and the ladies of Cotton + Steel.  There are plans to get quite a few other movers and shakers in the sewing and textile world to Nashville as well. (The calendar is already packed!)

“It’s exciting for me that I’m now in this position to not only run around and teach what I know how to do and what I’m interested in, but I get to have a new and different involvement with other designers – which is lovely! Craft South gets to be this connection between what people are excited about in the making industry and the people who are doing it,” stated Horner. Despite Horner’s standing as a sought-after designer in the industry, she understands the challenges of running a brick and mortar business.

I’m not even quite sure how to classify what exactly this is, but that’s why I was fascinated by Horner’s vision.

It’s easy to see that the shop’s inventory is meticulously curated to be gorgeous. Every last inch of the space is filled with eye candy – from color coded sections of fabric bolts, shelves on the diagonal holding bright skeins of yarn, to walls and walls filled with notions of every kind. A section of the store Horner calls ‘Handcrafted South’ is dedicated to lovingly handmade items for sale.

“I tend to like a very broad styles and designs, but they’re all connected,” she admitted. “Is it beautiful? And is it quality? Then yes! My hope is that we’ll also in turn have a diverse customer.”

Horner says she has seen other quilt shops struggling in what’s becoming an ever increasing online marketplace.

“I think at a certain point you make a choice about what you want to do,” said Horner. “I’ve seen a lot of shops that have been around for a long time that have done a good job of integrating the modern aesthetic, but also sticking to their guns in terms of what they think is important in terms of fabrics and patterns and the type of look they’re trying to promote.”

During our conversation, she went into great detail to explain that it’s not financially feasible for a business to transform its entire inventory to follow trends. Instead, it makes more sense to integrate newer products in with traditional lines.

“It’s a matter of looking at what you have in a fresh way,” suggested Horner.

Over the past two decades, Horner has seen trends come and go, and significant shifts in the way people create.

“Professionals were getting into doing crafts in their spare time,” she observed. “For so long, sewing was intended for and catered to the homemaker. The industry is now geared toward people who have less time.”

Horner believes the theme of simplicity has entered the scene: one-hour skirts and 30-minute pillows.

“While I appreciate all that, I also like to remember that it’s really lovely to take a very long time to make something,” asserts Horner. “The idea isn’t that it should be fast and cheap, and over and done. The idea is that you do want it to be special because you’ve taken the time to make it.”

Craft South aims to provide a supportive environment for learning, sharing, and creating together.

“The purchase of our sewing machines, yarn, fabric – comes with the support of being able to walk in here and talk to us about it anytime,” promised Horner. ”

For the locals, Horner and her team have hosted several social events on Sunday nights that combine entertainment such as a local band with working on a handcraft among like-minded creatives.

Now that Anna Maria Horner’s latest dream has become a reality, she is here to stay. She isn’t sure what’s next, but said she’s open to new possibilities.

“I always try to go about my decisions for work very intuitively,” Horner reflected. “I’ve seldom ever sat back and said, ‘In five years from now I want to be doing X, Y, and Z’ because things change. Conditions change, variables change, my family changes, our needs change. I’ve always just tried to do the best in any possible scenario. What we can bear as a family in terms of my work, travel, or designing… I’ll have to get back with you on that!” 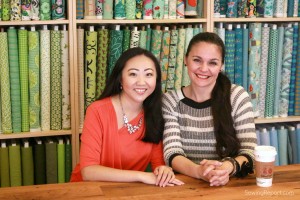 – Written by Jennifer Moore with many thanks to Anna Maria Horner and the Craft South team for their time and hospitality in Nashville!

(Originally published on MooreApproved.com in August of 2015)